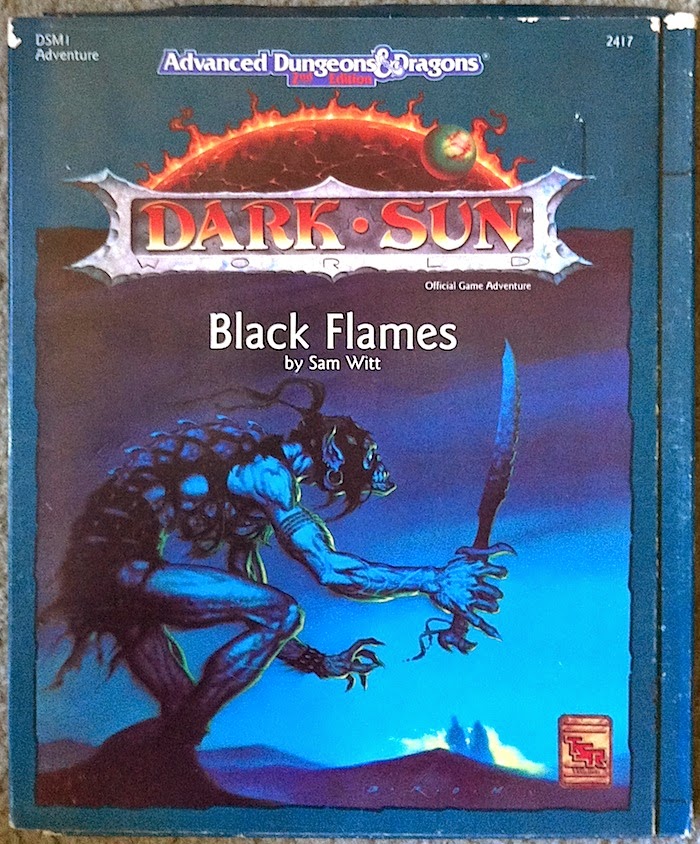 This adventure module for the Dark Sun campaign setting seems to be cast from the same mould as Freedom in many ways. This ranges from the constant railroading, through to a general lack of rewards beyond gaining the hatred of some powerful NPC(s). So, right from the outset, I was underwhelmed by it.

The plot is simplistic to be fair: its a quest for a maguffin. In this case, a powerful scroll located in the ruins of Yaramuke and the Black Oasis. And the NPC wanting this item just happens to be a neo-dragon that the PCs have never heard of. Firstly: Dragons are supposed to be rare. Secondly, they're powerful. So why can't this guy just do it himself? Well, it (retroactively) turns out that there is a (never mentioned anywhere else in the canon) magic barrier preventing evil people from taking it without losing all but two senses (hearing and touch).

My strong advice is to totally replace this random dragon with a favourite NPC villain from your own campaign. I'd suggest Malignor (see Arcane Shadows suggestions too) or someone similar.

At the outset, the PCs are assumed to be travelling the desert. Which is a nice alternative to BANG! you're all slaves meme that infected previous publications. The big bad NPC then conjures a sandstorm to isolate the PCs, deprive them of water (because there's no Water Clerics in the PC group with a bit of luck?) and then have his undead (but seemingly normal) minions offer the PCs water from the Black Oasis. Which will kill them unless they do his bidding. Seriously: he's that bothered to not do this mission himself despite his own power.  That's why a good GM will replace this big bad NPC with someone a bit more interesting.

The second part of the adventure is actually nice. It is non-linear to a certain degree: the PCs are able to explore the ruins of Yaramuke in any which way they please. Its therefore almost a bit of a dungeon crawl, but Dark Sun style! But this is railroaded when the Sorcerer-Queen of Raam shows up -- she also wants the scroll at a coincidental time to the big bad NPC -- and all fire works erupt between the two. Naturally, in such a high level fight, the PCs should be little more than pawns and should get out of the way to avoid a splattering. Either way, these two powerful NPCs will end up not liking the PCs.

In the third part, the ruins collapse, and fleeing, the PCs must try to free themselves of the curse of Black Water by negotiating with the local druid. Whilst getting through all the zombies that have previously died of the curse. A revenge attack by the Big Bad NPC then finishes off the adventure. But I would strongly recommend that encounter for a much later time!

Beyond that, the format of the adventure is still in the spiral bound books that make a ruination of the card container they come in. Hence overall, I'm not overly impressed with the adventure. It has some good points, and with work (especially the replacement of the big bad NPC and hopefully their latter escape) could work reasonably. Better than Arcane Shadows and certainly way better than the worst of the lot: Asticlian Gambit. But not much better than Freedom without significant work (which I've recommended above). Overall, 2 out of 5 for me -- don't run it "as is": plan ahead and change the script and overall plot, but retain the non-linear middle parts.