Out and about on my travels once more, and I was in the city of Newcastle (UK) recently in the north of England. As per usual, I navigated my way to the local Games Workshop store (Warhammer now) to poke around and see what it was like. 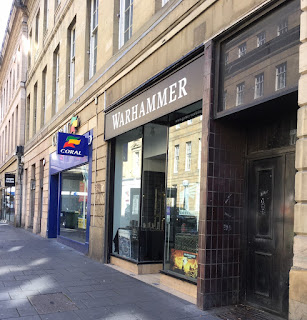 The physical location of the store is very near the Monument railway station (metro) in Newcastle and therefore provides a hugely convenient place for footfall. Indeed, it is one of the better located Games Workshop stores that I've been to in larger cities in the UK or Australia. It is very near some of the modern, large shops and shopping precinct in the city centre and honestly is situated almost perfectly.

The inside of the store is on par with modest sized stores in similar cities. There were a range of tables set up when I was there, for both Age of Sigmar and for Warhammer 40,000. Of particular note was the 40k table that I took a few pictures of below. Clearly in a Necromunda set-up, this display was something that I found both hugely striking and quite inspirational, if a little outside the budget of someone just starting out in the hobby I suppose. 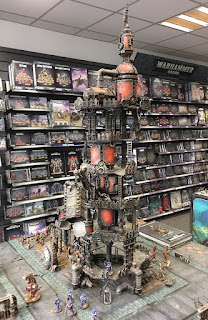 Close up of part of the scene below, focussing on a crate that is being hauled upward. Another very nice detail on the splendid display! 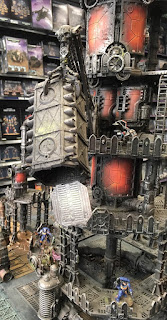 The store itself was well staffed, and they were polite to me, but not nearly as pushy as some of the other stores that I've been to. Indeed, I had a good browse without being molested by constant questions about what armies I was collecting and game systems I was interested in. This was a nice change - they got the level of interaction right for a veteran like me! Thank you.

Overall, I might have given it a slightly lower mark, but the display blew me away, so 5/5 stars!

Labels: misc
Email ThisBlogThis!Share to TwitterShare to FacebookShare to Pinterest