A weekend hobby update in the form of a conveniently timed tactical support squad. This particular squad is made of 5 legionaries armed with plasma guns. The plasma guns came directly out of my bits box. As can be seen, they are standard Warhammer 40,000 fare, and on top of them one is already sporting a thin white undercoat. 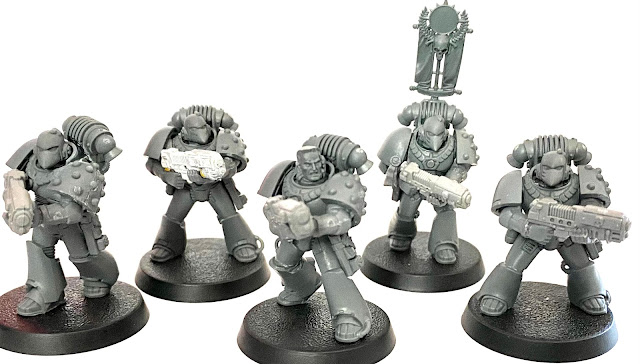 There are one or two other subtle additions from the bits box here as well. Naturally, the arms are from other marks of armour for the simple reason that the beakies lack hands (the hands are usually attached to the weapons for these newer marines - a bit of an on-going backward compatibility problem for the range arguably). The bare head of the centre marine is similarly a standard Warhammer 40,000 head. Some of the accessories around the waist and belt are taken from a variety of sources, as well as the purity seal -- or as I think of it here: Oath of the Moment -- on the shoulder of the marine with the vexilla.
Need to get these undercoated soon and painting underway realistically. But I could also do with buying one of those transfer sheets full of decals before getting too carried away.
Posted by jabberjabber at 20:54