Mid-week painting is a very welcome change of pace for me at the moment, and a happy respite from what is going on in the wider world. I have finally tackled my Tyberos model that I bought from Forge World a while ago. The plan that I had all along was to paint this particular model up in the colours of the Night Lords.

The reason behind this (seemingly peculiar) choice was to see how he looked in these colours due to the fact that the Carcharodons might be descended from this traitorous chapter. For a more in-depth crawl through the possible successor chapters of traitor legions, I wrote a popular article on the topic in April. The Carcharodons are noted as having possible Night Lords elements within them, or even inside their gene seed in a chimeric fashion. Hence this was a strong motivator for the choice of colour scheme for Tyberos, coupled with a potentially new opponent for some of my smaller games. To be clear, I won't be collecting Night Lords as they simply don't appeal to me greatly beyond their paint scheme (I'm not a fan of their background, although I can readily appreciate the work gone into this legion over many decades of background fluff. Nor do I relish playing against this legion and their fear inducing ways of fighting!). 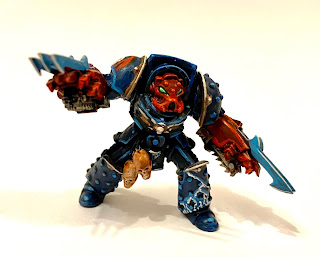 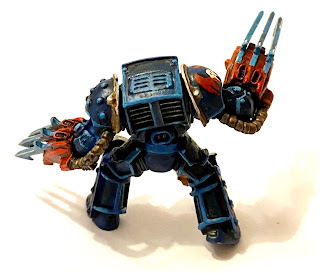 Painting followed a home brew approach to the Night Lords colours. A black undercoat was applied to give the model depth, before using a base colour of Caledor Sky for most of the model's bluer parts. This was washed down with contrast paints plus a touch of Nightshade to give the model some depth. Edge highlights were applied to the bluer parts in Teclis Blue followed by Lothern Blue. Some of these edges could have been neater, but I've not managed to purchase new paint brushes in a while (will be getting out more soon, hopefully! And yes: I like to purchase my brushes in person rather than online, before anyone says that). I attempted a lightning effect on the model's left leg which I am pleased with overall. It is almost impressionistic in nature, but seems to work a treat on this model.

I decided to use reds on the fists and helmet, inspired by Sevatar. This battle brother's life is therefore held in the balance by the Primarch (or potentially was, until he was assassinated). Two tones of red were used here, including a wash of contrast paints and darker tones to blend in. Eye lenses were picked out in white before getting a sampling of green to offset the red helmet, and a careful pin prick of reflection inserted at the back edge of the lens.

Cables, recessed metal, and other metallic parts were picked out in lead belcher before receiving a cost of Guilliman Flesh (yep: really). On the upper parts and edging of the shoulder pads, I was quite liberal with this and it has created almost a semi-bronze trim which I am very happy with the blend of. More edging in whiter colours picks out the edge highlights for the uppermost parts of the pads.

Finally, like many people, I only have the older Night Lords transfers that used to come with the older chaos space marine boxed sets. They're aged and don't look terrific these days. So I decided to live a little dangerously and do a free hand icon on the right shoulder pad. The basic shape is done in Mephiston red, with a fanged skull placed in the middle, over the top of this. Black then gives the outer edge of the freehand a good outline that is more than sufficient to round of the basic shapes required here.

Overall, this has been a very interesting experiment to undertake, and one that I hope will be appreciated by readers -- changing the status of a miniature and its in-game loyalty purely by its paint scheme is an adventure, and one that I would fully encourage anyone to try out!