Reinforcement weaponry is here for my Reaver Titan: an apocalypse missile launcher. 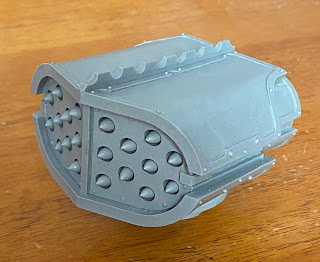 This heavyweight resin product from Forge World only comes in a small number of parts. The main body of the missile launcher is one solid, large blob of resin that is hard to miss. On the rear of the launcher is a small vent system that has to be glued on. Beneath is the connector that plugs it into the carapace of the Reaver Titan itself.

And at the front are the missiles themselves. Each and every one of the missiles comes on a small resin sprue and must be added on its own. This is tricky due to the curvature of the missiles (it makes them tough to get in place, even with tweezers). Significantly, it is also easy to get one slightly misaligned and pointing in ever so slightly the wrong direction compared to its neighbours. This can be seen in the image where I've taken it at a certain angle to exaggerate this effect. Look closely and its possible to see a few missiles whose tips appear to not face forward. In real life when looking at the model straight on, this is hardly possible to detect though. I am reasonable confident that once I've applied a paint scheme to the missiles that any slight deviation from full frontal facing will be easily disguised.

I know some people like to remove some of the missiles to suggest mid-battle action. But for me, I've decided to keep all of the missiles in their place since I wanted to present a fully loaded and ready weapon system. I should post more Reaver pictures as there's been a hell of a lot of progress since the last time!