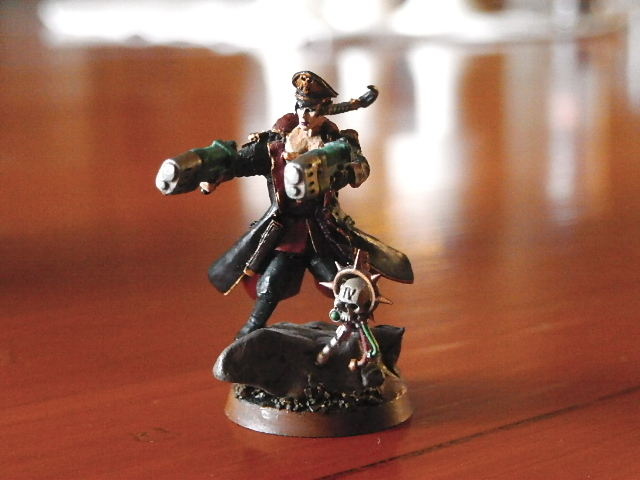 Hi All, Eldrad Vect here, this time with the most difficult, time consuming and amazing conversion I've ever done, my female Lord Commissar or otherwise known as Lady Commissar. It was ambitious but I just personally didn't like any other female commissar out there and had to build my own, also none of them had twin Plasma Pistols either.

A little fluff on her, since I love fluff and write my own sometimes. Lady Commissar Anastasia Shiranova of the 99th Vostroyan Veteran Regiment, famed for her reckless strategies and almost supernatural intuition. Found by her father upon his doorstep, the half-eldar girl was raised in the Imperial Guard, counting as the first-born of her father, her xenos background was only discovered when she entered her early 20s, the physical changes involved her growing the characteristic pointed ears of the Eldar. However at this time she was a full member of a veteran squad under the command of Sergeant Yuri Korsakov, who trusted her enough to not report her. By the time the Inquisition had discovered, she was a respected Commissar within the Imperium, her deeds to the Emperor far outweighed her Eldar heritage.
Thats as far as I shall go with her storyline, or else it may drag on.

I used the body and the hat of a Death Korps of Krieg Commissar, carving out the chest and head with a hot knife, re-aligned the legs and arms to the pose they are in now. The chest and head are that of Lelith Hesperax, as I mentioned in one of my previous posts. The hair was the braided ponytail of a Dark Eldar Wych and the Plasma Pistols came from a Cadian and Catachan Command Squad. The rock on the base was from the beach and fastened on using Green Stuff, I also used Green Stuff to make the top of her corset and breastplate. What do you guys think, hot or not? Also, what do you think of my fluff?
Posted by Eldrad Vect at 10:40