Kharn was once a voice of reason and restraint on Angron.  I guess that shows just how vexed Angron was with the Universe at large.  In the new 6th edition codex, Kharn feels pretty similar to what he has been all along: a vicious killer who lives only to kill, maim and burn.  Cheaper than Abaddon by over 100 points, Kharn is an excellent choice for close combat armies at lower points values, whilst he can be buffed up with accessories (e.g. land raider with terminator units!) at higher points values. 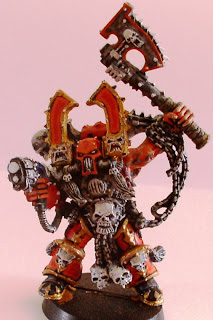 So, what can Kharn do for the chaos general?  Obviously he can unlock Khorne Berzerkers as troops choices -- hence players going down the Khorne route will probably almost automatically include Kharn over a regular chaos lord with the mark of Khorne.

He gets Gorechild, which means he always hits on 2+ (and hits his own unit, if he's in one) on 1's.  Combined with a high strength and low AP, Kharn should be able to take out most opposing challengers, units and light vehicles (due to armourbane).

He automatically gets the hatred incarnate rule ... but this might be pointless if your opponent is playing some variety of space marines (remember, we get veterans of the long war now).

But like other characters, he isn't an eternal warrior and can therefore die just like any other space marine, if his invulnerable save doesn't work.  Along with Lucius and generic lords, he is one character that I wouldn't actually mind being turned in to a daemon prince.  Heck, even a chaos spawn (late in the game) might not be a bad result to get the wounds tally back up!

In terms of how to run him, I think we're going to be taking with either berzerkers in a big blob (plus or minus a rhino), with terminators in a land raider, or perhaps even regular marines with the mark of khorne and an icon to taste as well.  On the charge, Kharn and his unit will hit, and hit hard.  Seven S7 AP2 attacks (with armourbane) hitting on 2+ is going to hurt most units in the game afterall!

To some players, it might be tempting to detach Kharn from his unit on the turn of his charge to avoid self-inflicted injuries.  But I think that's only a good option if there are multiple targets to be charged at and tangled up in combat.  Due to his standard toughness and regular saves, he should try to stay with his unit for the main part, at least until he's snugly in close combat situations that he can win quickly.
Posted by jabberjabber at 10:00

good points, I was looking at him last night, another "trick" is use the champion in the beserker unit to challange and then if there is no other chaps to challange Kharn then simply meat grind through the unit!

Does t kharn rerollly his failed hits on a one? If so, that's one wy to bypass his betrayer rule. Still a great character IMO and has remained a constant cheap hard hitter for the past 3 codex(plural?). Good review.