This is the first post of many that will systematically review the new 6th Edition Chaos Space Marine codex.  And to kick things off, what better character / unit to consider than Abaddon the Despoiler?!

The first thing to note is that his points cost is very high: more than a land raider.  But he does get eternal warrior and you don't have to roll for the warlord traits - he gets black crusader automagically.  In combat, he is going to be an absolute wrecking ball.  He can select between his daemon blade (granting a random number of extra attacks - and hopefully not wounding himself in the process) or the Talon of Horus (slightly lower AP, but better S).  Either way, its quite likely he will be taking down any character unfortunate enough to come in to contact with him -- and like other chaos lords, he will have to challenge them.  Yes, he's even going to best Calgar I'd say! 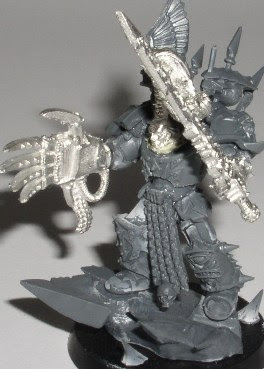 I think the main negative side of things is actually the rewards of chaos chart.  With such a good likelihood of winning every combat against other characters, there's a none-negligible chance that he will get turned in to a chaos spawn or a daemon prince.  Either way, its not good news, I think!  Not only are those two options much worse than Abaddon, the perks he has do not carry through.  Therefore, I think it would be best to slot in a Dark Apostle HQ choice in Abaddon's unit so that he can at least re-roll undesirable results.

Next, we actually want him to get in to close combat.  That'll mean teleporting on to the battlefield (but then we can't do that with the Dark Apostle), or riding in a transport (i.e. land raider) to get where he wants to be.  Given he can turn chosen in to troops, that's one option for his accompanying band of chaos warriors.  But I think that a squad of chaos terminators would be a better unit for Abaddon to tag along with.

And therein, we can immediately see a problem.  Two HQs, terminators plus/minus a land raider quickly adds up the points.  I not sure at what points level I would consider taking Abaddon to be honest.  At low points (e.g. Conflict-style at 750 points, or 1000 points), I suspect that taking more bodies may prove wiser so that enemies don't give Abaddon the run-around.  At 1500 to 1850, he could be a possibility - and a rude shock to opponents.  At 2000-ish, I don't have as much a problem as his points cost is then sinking below 20% of the total cost of the army (I like to aim for about 10 to 20% of points spent on an HQ in general, to give a little balance).  And in Apocalypse: you bet!

So to summarize: he is awesome.  He costs heaps.  He will win regularly.  He's tough to kill.  But he may well become a victim of his own success by turning in to a chaos spawn (or daemon prince).  Hence there's risk involved here!  But you're reading this because you're a chaos player, right?! :)