I wanted to talk very briefly today about the new Eradicator unit in 40k. Now, I will freely confess that at this stage in my gaming life that 30k is my primary game. 40k has, very oddly, become second place to 30k. This doesn't mean that it has fallen from favour, its just I like 30k better right now and feel much more at home there. I could probably write more about this, but will save it for another time perhaps.

On to Eradictaors. On the recent Twitch stream, the data slate for this new unit was revealed. 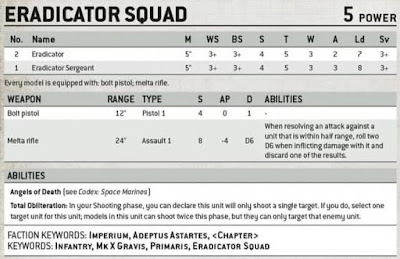 I wanted to simply point out a few things about this squad in relation to an old 40k favourite: the devastator squad. With devastators, one can get 5 men in the squad armed with 4 multi meltas. This seems to be a reasonable comparison given the power cost. At a basic level, that is 5 wounds with 4 heavy shots containing the Melta special rule.

Now check out the new eradicator squad. This is 9 wounds that pumps out 6 shots (assault shots at that as well) with the self-same special rule. Let's not even talk about the total obliteration rule (and just shrug to say even devastators might get their old doctrine and the sergeant might still have his tricks in 9th edition).

Focus for the moment on the power of this unit. And the creep of it. To me, the power creep present is incredible. No really. There is (arguably) now zero point in taking traditional devastator squads with the new eradicators available. Only old timers like me would play such dedicated Melta squads any longer. New entrants to the game may feel they have no need to purchase the devastator squad any more. [Even if they play Salamanders.]

Primaris marines are replacing "core" marines in the game. Period. I foresee the day that all 40k marine players might be using Primaris marines in their chapters and the regular marines that I use in 30k will be no more. This is a bit concerning given the history of the parts, and the future availability of (e.g.) plastic mark 4 armour boxed sets. I'm not sure if I'm alone in thinking this, but your thoughts are welcome.
Posted by jabberjabber at 21:57

I'd add that the Eradicators are 9 wounds (not six) at T5 which likely stick around at relative effectiveness much longer than multi-melta devs, where a couple wounds quickly eats into the weight of fire they can deliver. And the assault shots vs. heavy for devs helps too as they can easily move their threat range (limited to 24") around while firing where traditional devs can't.

Still need devs for longer range fire, but I can't argue there are other ways to get it that are probably better for the points.

Updated to 9 wounds --- my oversight entirely (oops!). The T=5 stat is also amazing and I agree gives the splendid staying power that I should have added in there as well. The thought remains as to why anyone would field multi melta devs any longer.

Also: with smaller board sizes predicted, the need for longer range threats might be going down as well?

You really don’t have to foresee that people will swap their old space marines with the new primaris stuff. They already do that. But that was GWs Plan all along of course. They never discontinue old marines, they just make everyone never use them anymore by making them so bad in comparison that people question their own life choices if they don’t swap them.

Board range is an interesting question; esp if tournaments change their tables. I've lived on a 4'x8'/4'x6' board so long I don't personally see the new minimum sizes mattering. But I'm not the right demographic. I'm in the old 2nd ed. gaffer camp now. :P Anyone reading this ever play on a table with felt cloth draped over stacks of books and cereal boxes for hills? But I digress.

Cool stuff, definitely escalating the power of the game, selling cool new sculpts, and totally aimed at retiring mini marines (gradually or not).