I have a number of projects going on all at once on the worktop. This particular one may be a little surprising to my long term readers, but non the less, here is Tyberos. Also known as The Red Wake. 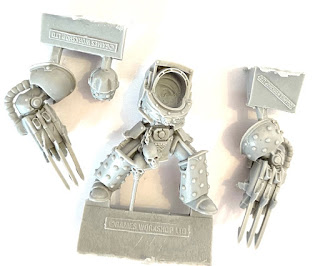 The image shows how Tyberos arrives, fresh out of the blister pack. This is clearly a mould that is now aging. With that said, the lines and details are crisp enough and I'm glad to have got hold of the model now, rather than allow it to go out of sale or availability.

As for the plans: this miniature will be used in 30k, rather than 40k. And the legion might just be a novel one. More later on these dubious plans.