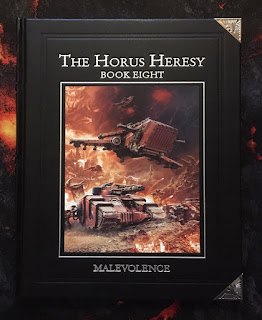 Background.
These creatures are the stuff of legends, and in the presented background are suggested to be the daemonic equivalent of titans. Miniature wise, these are the exalted greater daemons, or any large dragon or fiend from other companies that you can lay your hands on. Or your toddler who will ruin your game board?

Strengths.
They have a stat line that is better than many primarchs. Their abilities are commensurate with this too. However, they get to choose different options compared to the regular emanations, some of which are better than others.

Weaknesses.
The only thing I can say here is that I feel the points cost is fractionally too high in comparison to Primarchs, especially given the buffs that primarchs can provide.

Builds.
Given that some of the options are better than others, I will go through them sequentially before presenting a couple of builds to consider.

Lord of Chaos. Given the bonus to saves, this should be an automatic selection for all arch-daemons.

Reaper of Souls. Possibly not worth it unless you are terrified of being tar-pitted.

Breaker of Titans. You are taking a Lords of War here, hence the enemy can as well. This would be a prudent selection.

Font of the Warp. Mastery level 4 is fabulous, and very appropriate for Tzeentch players. Don't take if you are playing a Khorne army though.

Wound in Reality. Nice for Mirror of Hate builds I think.

Beyond Death. The inherent randomness in this upgrade possibly argues against its selection. That, and I suspect the time taken to down this daemon means it is not prudent.

Rend Space and Time. The ability to place a new rift marker is tactical genius level trolling against an opponent in the right hands. Nurgle players will like the bonus victory points, and its is also very Tzeentch-like too.

Warp-forged plate. A 2+ armour save is good.

Flying Gargantuan Creature. Can be taken in addition to three of the above. Recommended.

Crimson fury: Arch-Daemon, Lord of Chaos, Warp-forged plate, Torrent of unreality, Flying (830 points).
Armour everywhere, and a giant flamer to torch the flesh from the skulls for ready addition to the throne.

Maddening Swarms: Arch-Daemon, Lord of Chaos, Font of the Warp, Rend Time and Space, Flying (900 points).
The Font of the Warp has to be a given for Tzeentch daemons really.

Mirror of Hate. Arch-Daemon, Wound in Reality, Font of the Warp, Breaker of Titans, Flying (860 points).
Seems fluffy to me, and could work really well for the alternate victory conditions under certain circumstances (like being killed and taking others with them).
Posted by jabberjabber at 09:00