One colour that I've had a lot of problems in the past with is bright yellow. A while back (several years back in fact), I had this bright(!) idea that I'd field some chaos renegades whose primary colour was to be sunburst yellow. I called them the Warp Hornets and the idea was to have their colour scheme wasp-like: black and yellow. I even took them to GT2007.

The problem is that bright yellow is very annoying to shade correctly and highlight correctly. The picture displays a number of different thoughts that I had to paint the renegades, ranging from multiple drybrushing layers, highlighting in even brighter yellows and making various locations on the miniature a "muddier" yellow. I've never been wholly satisfied with any of the painting techniques that I explored to try to get the look right in my eyes. So, bright yellow remains an unsolved problem for me. The best chaos marine pictured is arguably the central aspiring champion where there is a line of black around the should plates before they meet a gold / bronze rim. It certainly helps it to stand out. 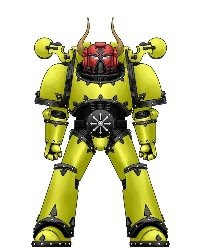 Speaking of standing out, these miniatures certainly stand out against the crowd on any battle field!, more so than the Imperial Fists even. The dominant bright yellow makes them look highly chaotic, but choosing a secondary colour (red, purple, blue, gold, black) was also difficult as the image above testifies. So, if you want your army to be noticed, bright yellow is the way to go from experience. To make them even brighter, try dipping them in gloss varnish; I did!

I'll post more pictures of the Warp Hornets at a later date, as well as some fluff perhaps. I've got a box of these chaos undivided minions sat around, alongside some terminators. These days, I usually only field them in apocalypse or at most, a single squad in an chaos undivided marine renegades army. I am thinking of starting a new chaos chapter that doesn't use bright yellow; I'm thinking blue is much easier to work with.
Posted by jabberjabber at 07:19