The Forge World model for Corax is one that I've had in the collection for a little while, but only recently found time to assemble together. The sheer amount of resin involved in the miniature is one of the larger amounts for the Primarch series within the Horus Heresy, and this alone means that would be modellers need to take some time to get everything right.

For me, the nice parts were the long rods that features in the shoulders to provide stability to the arms for Corax. On the same point, but in entirely the opposite sense, I found the side engines on the jump pack to be most fiddly since they can be orientated in a number of ways. The wings are also very delicate and need some care to be fully processed (including cleaning, as well as removal of flashes and the like). I could have spend longer doing the wings, but it won't detract significantly from the subsequent painting that I will end up doing since the mould is now clearly ageing and some of the details, whilst crisp, are arguably not quite what they once were. 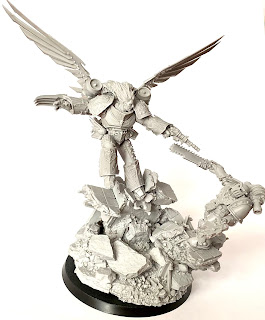 My new rule for buying Forge World miniatures is to purchase them when they come out fresh. That way, one is almost guaranteed to have as optimal a cast of the miniature as possible.

Regardless of this, the miniature is still totally amazing. The sheer dynamism encapsulated in the way that Corax is landing hard on the rubble and shooting at his foe is impressive to say the least. It is one of my favourite Primarch sculpts (much better than, say, the Ultramarines' Roboute, or the Imperial Fists' Dorn who by comparison are relatively static). This is much more on the level of the World Eater's Angron, or the Emperor's Children's Fulgrim sculpt - and I really appreciate that.