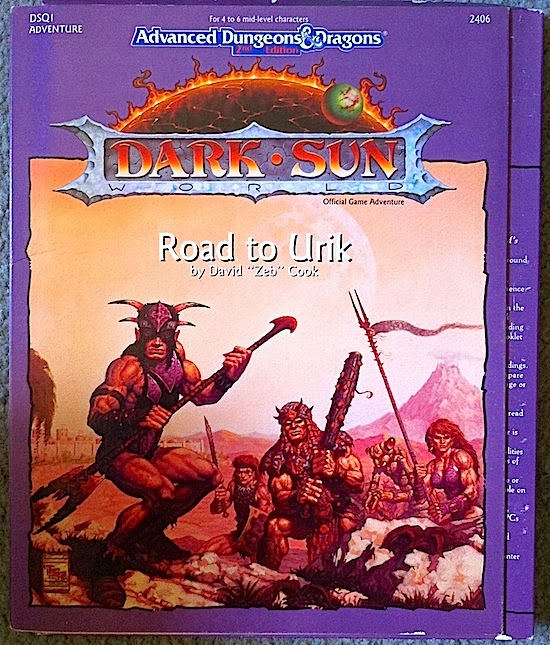 If the ironically named "Freedom" has little player choice, then the nominal following Dark Sun adventure, Road to Urik, has a splendid scope to forge a player chosen path with different consequences for every decision made.

The plot in the previous adventure resulted in the Sorcerer-King's death. This lead to a power vacuum that his high templar, Tithian stepped in to. But in turn, his hand was pretty much forced: he released every slave in Tyr (the city where all the action is happening).  The only thing is, other Sorcerer-Monarchs sense weakness in this turn of events. Tyr's nearest neighbour city-state, Urik, decides to send an army to invade (it wants control of the iron mines - and who wouldn't: metal is scarce on the planet of Athas). The adventure, Road to Urik, is thus all about how the players respond to this invasion threat.

In the first part of the plot, the PCs - heroes from the previous adventure - must help assemble an army to take on Urik's might. Since the usual methods of press-ganging citizens in to slavery to fight battles is out, they have to resort to other means. Why is a senator only making a low contribution to the building army? How can a dispute between merchant houses and newly freed masons be resolved to ensure supplies? Can the PCs stop the gladiators from deciding to march early to sate their bloodlust and build an even larger (but less trained as the gladiators!) army? All of these options present excellent opportunities for the group to make choices that have strong consequences later.  Too small an army (only consisting of the gladiators) simply won't stand a chance. How do they help the common cause?

The second part of the plot features the PCs given command of a small set of troopers and put in charge of a little bit of scouting. How will they control their charges? How do they prevent desertion, and how do they deal with re-captured deserters? What kind of patrols will they run, and will they be able to fight off a raid from desert nasties? The third and final part results in their scouting being discovered and a large fight ensues that they probably won't win...

For me, the main positive aspect of this is the consequences of the choices that the PCs make -- I guess I could make a similar statement about any game ultimately: anything that makes the players have consequences to their actions is a good one. There's a wealth of opportunity with this. If they annoy a noblewoman whilst building their army, there'll surely be a price to pay later (should they survive).  If they deal leniently with deserters, their command may not respect them (and so forth).  Overall, this adventure has real potential and I'd happily give it 4 out of 5 stars, even if the interior art is not by Brom(!)

Finally, this is the last published adventure that strongly follows the books that were published alongside the campaign setting (i.e. the Prism Pentad).  The next adventure deviates significantly from the books and is written by a different author to Freedom and Road to Urik.

Show how deep is this Dark Sun collection going to go. Are we going to be talking about The Will and The Way and Earth, Air, Fire, Water. I think I was short a couple of the later adventures and the City by the Silt Sea boxed set. I think it is all sitting in my garage so I could do and find out but it is pretty cold out there right now.

So, at the start of the year I made a vow to expand the remit of this blog, and hence these reviews are part of that drive! I think I will do quite a lot of the old darksun series, depending on available time...!