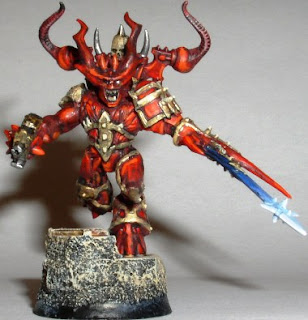 Apart from sounding like a great name for a Khorne Champion, the Crimson Slaughter are the talk of the town for being the second codex expansion for the Chaos Space Marine codex. Although the codex is looking weak at the edges apart from a couple of star units (heldrakes!) due to the creep in power levels (I'm looking at you Knights with D class weapons!) and more recent codex releases, the Crimson Slaughter expansion doesn't seem (based on the rumours and lo downs from those with the release already) to do terribly much to address it.

Having chaos possessed marines as troops is both cute and fluffy: to be certain! But unless they're backed up with a method to get in to melee range, and a few good variant rules, I'm not sure how much of an impact (apart from making a gorgeous looking army with a fully themed and painted set of marines) they're going to have to be honest.

The replacement of the possessed ability chart seems nice enough. A 3+ invulnerable save is excellent in the current meta, but them being treated as beasts instead of infantry will probably do precious little. Rending and wounding on a 3+ isn't too shabby and could glance a rhino transport to smithereens in extremis, but again, we're faced with the problem of actually getting them in to range.

The alleged relics (crusader, 2+ armour save and IWND) for 40 points isn't too bad, but depends on the exact set up the Chaos Lord has; and indeed: its battle field role.  Access to divination for 25 points seems okay, but again, what is the power level of the librarian/chaos sorcerer in question and is it still randomly determined powers?  So many questions!  Can't wait to see what the codex expansion actually brings with it!
Posted by jabberjabber at 19:42

I'm definitely curious to see what is actually in there. I mean, it can't be worse than Black Legion...right?