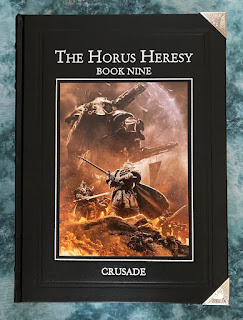 I keenly remember having some Termites when I played Epic scale back in its hey day. The Termite method of assaulting from beneath the surface has stayed with me, and always struck me as a great alternative, and even complement, to deep striking.
In the background, the Termite these days is stated to travel at speeds similar to surface transport craft. That's really good!
Strengths.
Subterranean assault is an amazing rule. It functions very much like deep strike does, except it comes up from beneath the ground. Importantly, it does NOT interact with the deep strike rule for determining how many units come on to the board: it uses its own pool. Hence for smaller points games, a player could take 1 Termite and 1 regular deep strike and have BOTH come in to play on the same turn. This is really good and will no doubt appeal to legions such as Raven Guard and Alpha Legion to name but two. Heck, most legions could make good use out of such pairings.
The Death From Below rule combines with this to describe how the Termite arrives on the board. It is very similar to deep striking in the sense of the distance it might move if there's an impassable feature it winds up on top of, but as an added extra it can displace units, cause wounds, and a S10 hit to vehicles on their side armour. Using this rule aggressively is highly encouraged.
Ignoring difficult and dangerous terrain is just icing on the cake.
Weaknesses.
Candidly, the Termite is not so great once it has emerged. It is more expensive than a rhino, but is fairly exposed once on the surface. Therefore there is a small calculation to be made by the potential controlling player: is the extra price compared to other transport vehicles worth it (along with chewing up a fast attack slot)?
Builds.
There are several builds, each with their own prices according to whether they are taken in the legions, mechanicum, solar auxilia, or Imperial militia.
To my mind, I think keeping the points cost at its raw level is probably a good idea as the extra armour and armoured ceramite are not quite worth it once the termite has done its job. Pay 80 points for the Legion version and be happy with it; and don't stress if it gets blown up on the next turn. Its job is to deliver a squad, and hopefully that squad will supply the firepower to make the transport cost worth it.
Posted by jabberjabber at 21:32